Foods in America have been greatly influenced by Europeans, native Americans, Asians, pacific islanders and several other countries. In this blog, you will get to know 15 top traditional foods in America, so fasten your seatbelts to get a glimpse of mouthwatering foods

Among the traditional foods in America, the Hot dog is ranked on top due to its consumption and likeness. Hot dogs are a great option for entertaining a big group during the summer holidays or for a family dinner on a weekday. Hot Dogs can have artificial preservatives, and proteins derived from other sources included in certain hot dogs, However beef is the sole ingredient.

Annual Consumption of Hot Dogs in the US

As per the research and stats from the Council, Americans consume 20 billion hot dogs every year. It is more than twice the yearly consumer spending. This corresponds to about 70 hot dogs for every individual annually. Hot dogs are available in 95% of American households. In 2021, US individuals spent more than $7.5 billion on hot dogs and sausages.

Charles Feltman of Germany is credited with the idea of serving German sausage on a bun in order to reduce the number of dishes needed. Nathan Handwerker of Poland and his Coney Island hot dog stand are the ones who made the hot dog a cultural icon. New York-style has ketchup and relish, but Chicago-style uses poppy seed bread instead of regular white bread and does not use ketchup.

Fast food and globalisation are inextricably linked in the rapidly changing twenty-first century, and the hamburger is emblematic of the growing influence of the United States.

When discussing hamburgers as among top 15 traditional foods in America, it is one of the foods loved and consumed by Americans. A hamburger is a sandwich made of a ground beef patty placed between two sides of a circular bread known as buns. The meat used in Hamburgers is typically grilled or cooked in a hot pan. There are several variations, and many restaurants, families, and individuals have preferred cooking ways and additives.

Why Hamburgers are said to be America’s traditional food

It may come as a surprise to learn that the hamburger in the United States has its roots in Germany, specifically in Hamburg, where the Hamburg steak was brought to the New World by immigrants. But it was the American who came up with the idea of serving steak on a baguette with cheese on top! one can proudly say that hamburgers are an American invention that has spread around the globe.

Macaroni and cheese, the quintessential comfort dish, has always been the rescue of many mothers trying to appease a fussy child.

There is nothing uniquely American about pasta and cheese, save for the belief that Thomas Jefferson, on a tour of Europe, enjoyed a specific pasta dish so much that he did research and had it presented at an official supper as “mac and cheese pie.”

What is the USP of Mac and Cheese :

One can eat mac & cheese on its own or as an excellent addition to many other kinds of cuisines, and it’s one of the most comforting foods around. A big part of that appeal to or attract the consumers is that it can be prepared in minutes and available as a frozen, ready-to-eat meal.

The love for French fries is unimaginable but for an American variation on the traditional potato meal, one should definitely give tater tots a go. Potato mini-balls with crunchy shells that are usually cylindrical can be found at breakfast and fast-food establishments.

Consumption of Tarter tots in America 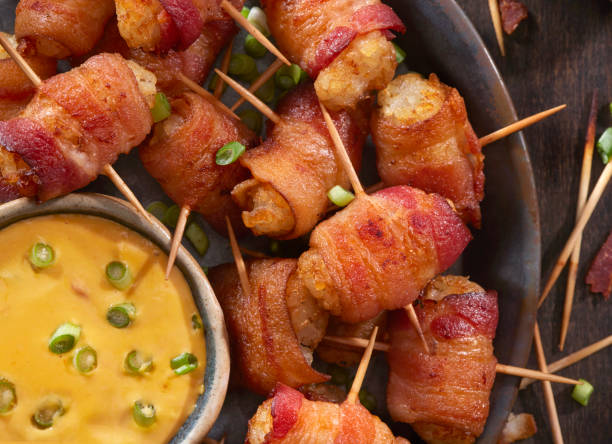 They are deeply ingrained in American tradition as they consume more than 70 million pounds per year, hence ranking as one of the most commonly consumed meals in the United States.

Barbecue is one of America’s oldest traditions, and it has evolved into an art form, with BBQ connoisseurs and fans from all over the country claiming their own favoured method of preparation. Regardless matter whether one like the meaty fare of Kansas City, the juicy ribs of Memphis, or the vinegar-based sauce of North Carolina, people can all agree that American barbecue ribs evoke strong feelings!

Different ways of having BBQ Ribs 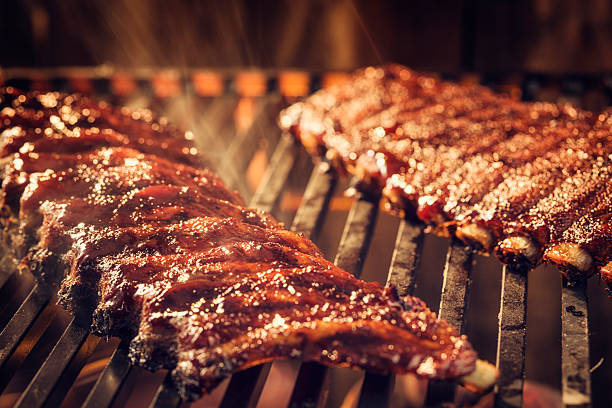 In Texas, smoked meats such as beef brisket, pork ribs, and sausages are popular delicacies. A favourite among millennials, particularly those from Generation Z, BBQ ribs take their inspiration from the meat smoking techniques popularised by German and Czech immigrants to the United States in the late 1800s and early 1900s.

Apple Pie – a symbol of American prosperity and national pride

Apple pie is so synonymous with American culture that it is often used as a metaphor. The phrase “apple pie” conjures up images of white picket fences and home-cooked meals. Apple pie is, of course, a national dish of the United States.

How to Serve Apple Pie 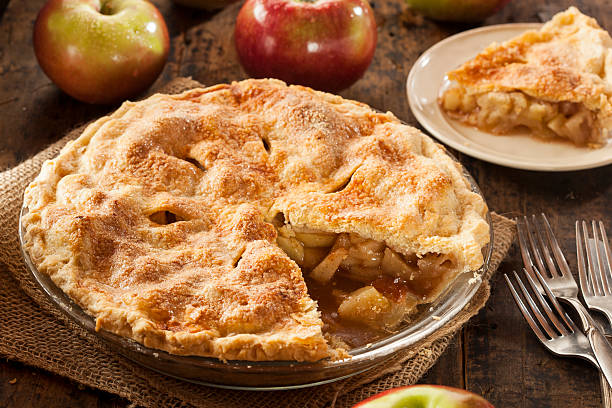 The phrase “as American as apple pie” is well-known and with good reason. Immigrants from Great Britain and the Netherlands are credited for bringing apple pie to the United States. It was served with a scoop of Vanilla Ice Cream for the first time in United States.

In a typical Reuben Sandwich, rye bread is toasted until the bread is crisp. Then cheese melts between two slices of corned meat, Swiss cheese, and sauerkraut.

How Reuben Sandwich served in the USA

The traditional corned beef, Swiss cheese, and sauerkraut sandwich are linked with delis in the United States. There is no denying that this sandwich is an American classic regardless of whether it was invented in Nebraska by a grocer named Kulakofsky or by Arnold Reuben of the now-defunct Reuben’s Delicatessen in New York City in 1914. 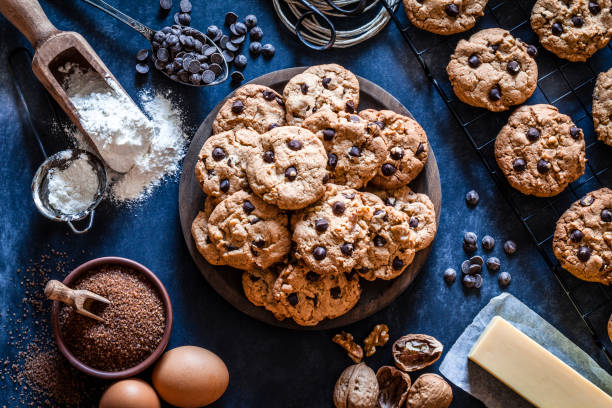 The chocolate chip cookie was invented in 1938 by American chefs Ruth Graves Wakefield and Sue Brides. They developed the recipe when she was running the Toll House Inn in Whitman, Massachusetts. There are 7 billion chocolate chip cookies eaten in the United States every year, with about 50% of these homemade.

Buffalo wings slathered in cayenne-vinegar sauce have been a favourite pub snack since the 1960s. The Anchor Bar in Buffalo, New York was the first to offer Buffalo chicken wings, which have since become one of the most popular bar snacks.

Buffalo chicken wings became a popular bar snack and appetiser in the 1970s and 1980s in the United States. While fried chicken and wings have long been staples of Southern cuisine, Buffalo has a more recognisable image.

How to serve Buffalo Wings 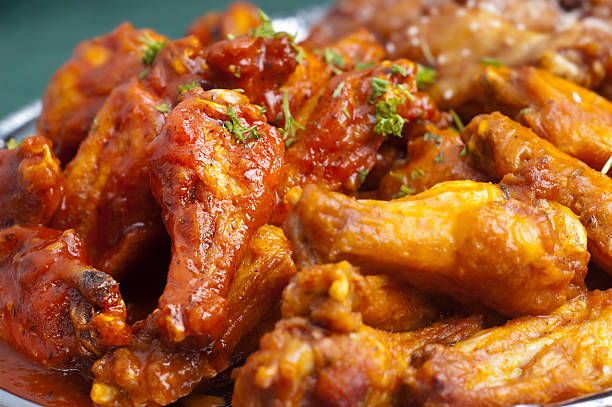 Unbattered, deep-fried chicken wings or drumsticks slathered in a vinegar and cayenne pepper-pepper butter sauce are known as buffalo wings. Celery and blue cheese dipping sauce are common accompaniments, both of which assist to soothe the palate. 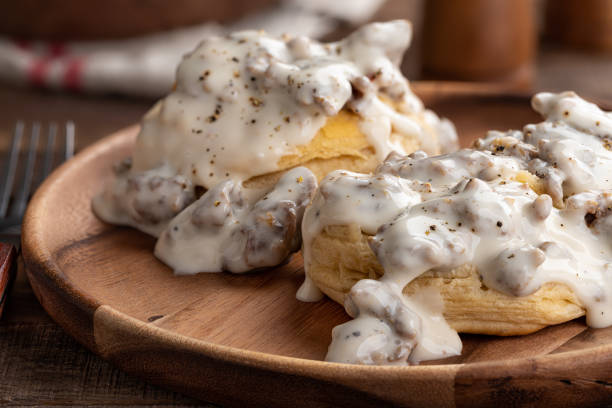 Biscuits and sawmill gravy were developed as a low-cost, filling breakfast alternative for the Southern colonies during the Revolutionary War. Country gravy is produced using drippings from pork ribs and fresh pork sausage bits, as well as black pepper and buttermilk for the biscuits. Bacon and chives, a popular combination, are now available as a topping for biscuits.

Grits – A popular alternative to oatmeal 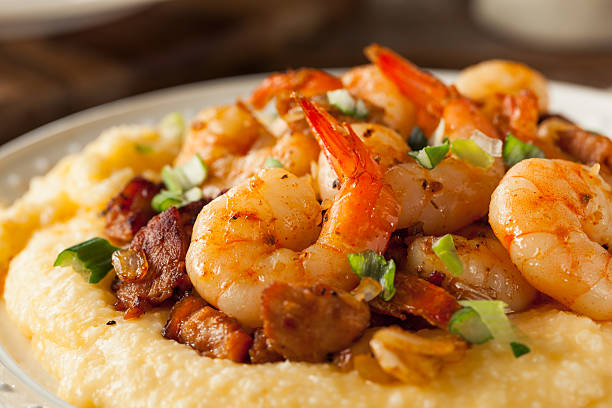 When you first try grits, you may be perplexed as to what exactly it is you’re eating. Grits are a staple in the diet of southerners, who can’t imagine life without them. Grits, a food made from ground maize, may be used in a variety of ways. They may be sweet or savoury, although the former is more common. As a morning cereal, grits are becoming more popular as an alternative to oatmeal.

Gubernatorial and Cajun events in New Orleans and the Acadian coast served Gumbo in 1803 and 1804 respectively. The most popular gumbos nowadays are seafood and chicken and sausage. Southern Louisiana cuisine’s West African origins are generally accepted by food historians. Both the rich and poor have it on their dinner tables.

This divine dessert, consisting of ice cream and cake, topped with browned meringue is widely eaten and is an essential part of American food culture. Within a decade, several renditions of Baked Alaska were circulating the globe. The name “baked Alaska” was supposedly coined at Antoine’s, a restaurant in New Orleans, Louisiana, US, by its chef de cuisine

Antoine Alciatore in 1867 to honor 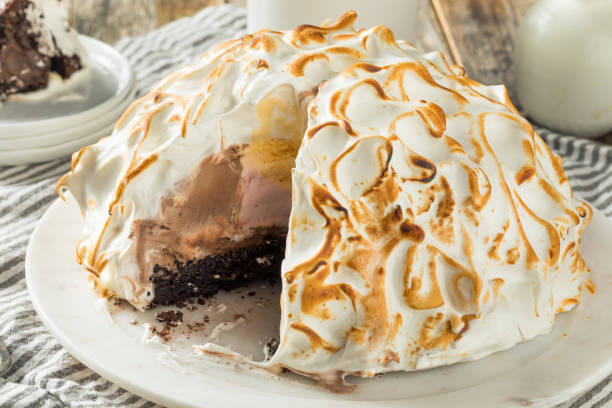 the acquisition by the United States of Alaska from the Russian Empire on March 10 that year. 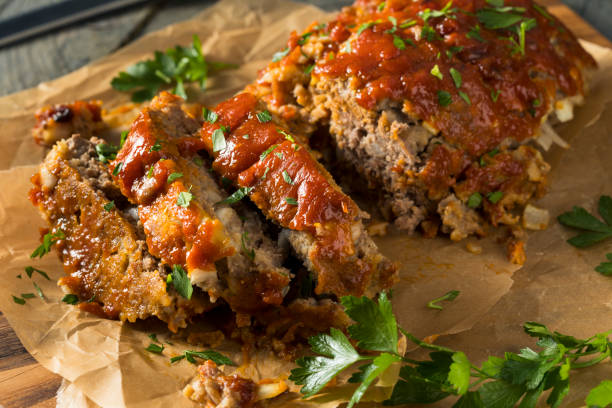 The first time that meatloaf appeared in print in the United States was in 1899, according to the Oxford Companion to Food. Modern meatloaf has its origins in the United States, although the dish’s ancestors date all the way back to Rome. There are various methods to enhance the meatloaf’s amount or taste by incorporating bread crumbs in the meatloaf. For an added protein boost, try baking some eggs into it, and a slew of spices may be added to suit your fancy. 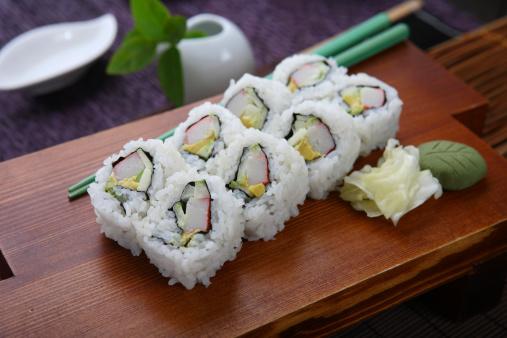 California rolls are the most popular sushi rolls in America, according to DoorDash’s stats, despite the ubiquitous availability of far superior sushi rolls. If you’d want to taste sushi but don’t want to eat raw fish, the California Roll is a terrific choice. Sakura Sushi in Orlando is the best place to get a mouthwatering California Roll or other sushi dishes.

It is common to think of the United States as a melting pot, where many ethnicities have contributed unique tastes to American cuisine. America has a rich history and culture because of its many customs and cuisines.

Keep in mind that “a balanced diet is a cookie in both hands” . The next time you’re in the United States, don’t forget to indulge in a burger or some chocolate chip cookies.